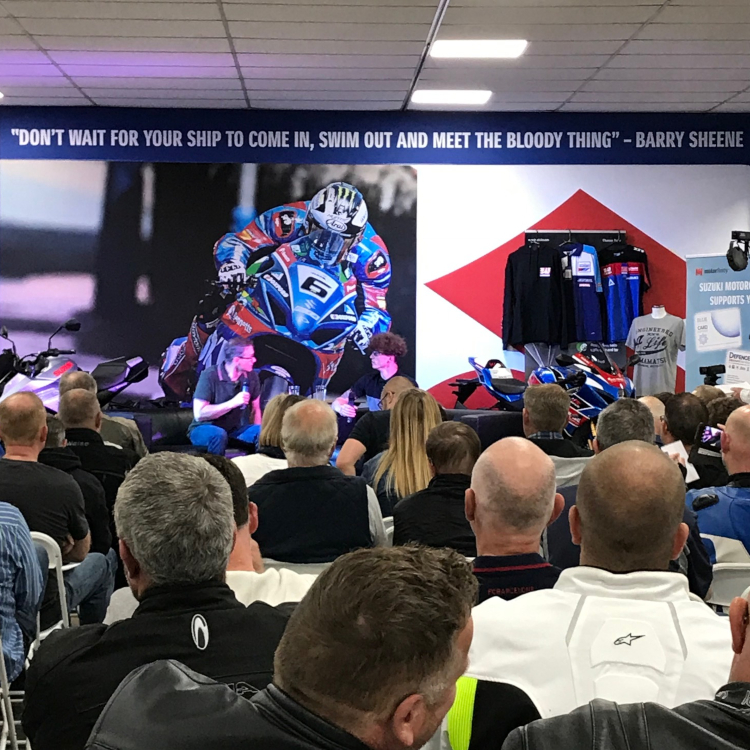 Motorcycle racing fans were in their element when we hosted an exclusive Suzuki event with two top British and international race riders.

With the large stock of showroom bikes reorganised to make room for seating, 200 invited guests enjoyed a Suzuki Evening with Bradley Ray and Jamie Whitham.

British Superbike Championship Suzuki rider Bradley teamed up with Jamie, a double British championship winner, former British and world superbike racing star and TV pundit, to give the enthralled audience an insight into the thrills and spills, trials and tribulations of being top riders.

Bradley told how he started riding a mini moto bike aged four, and was scared after hitting the garden shed, before progressing through racing mini motos, 50cc, 70cc, Spanish championship, Red Bull Rookies, 125cc and British Supersport before getting his big break and joining the Buildbase Suzuki BSB team. He made an instant impact, leading to his Donington double win on his Suzuki GSX-R1000.

He talked about the hard work, fun, fitness regime and, while it is nice to win, it’s also about being and doing the best you can be.

“I have got the best job in the world, doing what I love and I’ve just got to sit down and realise that I am out there racing bikes and doing it for a living and enjoying it and it is something I wanted to do for my whole life,” he told the audience.

A Q&A session after the interval saw a wide range of questions from the audience about his favourite circuits, racing heroes, ambitions and aspirations, motorbike collection and keeping fit even during the winter break.

Jamie was also able to give his take on how racing had changed since his days on the track but one thing was clear from both riders – their passion for the sport, motorcycling and competitive streaks -  all delivered with inside knowledge, expertise and humour.

A raffle in aid of the East Anglian Air Ambulance and Lymphoma Action raised £1,006.