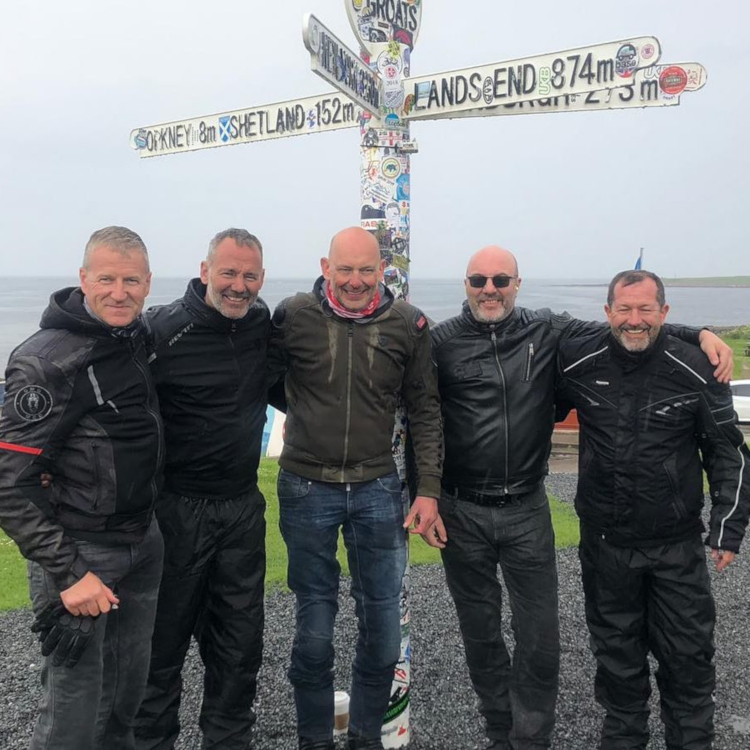 Directors Dave Willis and Rob Walters set the pace with a winning time in the Great Malle Rally, a 1,250-mile adventure riding ‘inappropriate’ motorbikes the length of the country.

Dave, Rob and friends Andrew Jay, Charles Bagnal and Rich Paine, competed, completed and conquered the longest motorcycle rally in the UK, from The Lizard in Cornwall to the Castle of Mey, near John O’Groats, in the very north of Scotland.

They travelled the length of Britain across mountains, coasts and valleys, mainly on B-roads, stopping at checkpoints only revealed in cryptic clues the evening before each of the five days of riding.

The winning team would be the one that did it in the ‘perfect’ time.

Dave took his Tucano, a Yamaha XT660 customised by Old Empire Motorcycles, Rob a customised Ducati Scrambler. Both were loaded with their clothing and camping equipment.

First, they had to reach The Lizard with overnight stops at Gosport in Hampshire, and a visit to the Sammy Miller Motorcycle Museum, and then Tintagel in Cornwall.

The first day of the rally proper took them from The Lizard to Cheddar Gorge.

Day two was through the Brecon Beacons and Snowdonia in Wales, on to Liverpool and finishing at Clitheroe in Lancashire. It was a long day, nearly 350 miles, not helped by a 40-mile detour after missing a turn.

The third day went through the Lake District to Gretna Green and camping in the grounds of a castle near Glasgow.

Day four took them alongside Loch Lomond to Fort William, Loch Ness and finished at Torridon in the north-west Highlands.

The fifth and final day was to Ullapool and then along the north coast of Scotland.

Altogether 100 riders took part, in about 30 teams, from all over Europe and as far afield as Australia, America and Singapore. Dave and Rob’s team set the best time on days one, three and four.

Their win was all the more impressive because Dave’s bike only had a 70-mile range due to its small fuel tank so they also had to plan for six or seven fuel stops each day.

What goes up must come down so they had to travel home again, stopping overnight just south of Edinburgh, then Matlock in Derbyshire before riding back to Suffolk.